Salix Homes launched its ground-breaking research project- known as MiiHome- yesterday in Salford, in front of the eyes of the media.

Representatives from the BBC, ITV and the Manchester Evening News among others were present at Springbank, one of Salix Homes sheltered housing schemes, to witness the grand reveal of the revolutionary technology.

Residents at this development are among the first to participate in the first stage of the research study, which will be rolled out into 200 homes across Salford in the coming months.

Described as a “high-tech guardian angel”, MiiHome is a joint project between Salix Homes, Salford Royal NHS Foundation Trust, The University of Manchester and The University of Salford which is designed to help elderly people who are frail and may have problems with their memory maintain their independence and remain in their homes longer.

This is done by constantly monitoring their well-being using artificial intelligence (AI) Tiny sensors, including Microsoft Kinect technology- most commonly associated with the Xbox- are fitted into people’s homes to look for any changes in behaviour.

Following its successful launch, MiiHome has received significant coverage through multiple channels, including TV, print, radio and online. This has included some great feedback through social media.


The trail-blazing project was a special feature on ITV’s Granada Tonight programme, broadcast on the evening of April 5th. A clip from the show can be viewed here.

The MiiHome launch was picked up by multiple websites, including 24 Housing, About Manchester, The University of Salford and B Daily, which all highlighted the exciting new technology which aims to make a big difference to the lives of residents and to the way that healthcare is delivered in the future.

The project also featured throughout the day on BBC Radio Manchester on their hourly news bulletins, as well as a longer piece featuring an interview with Jonathan Drake, Service Director of Business Development at Salix Homes. You can listen to it here. The article starts at 02:43:15.

The Manchester Evening News penned an article, describing our MiiHome project as a "hi-tech guardian angel"- a cutting of the article can be seen below: 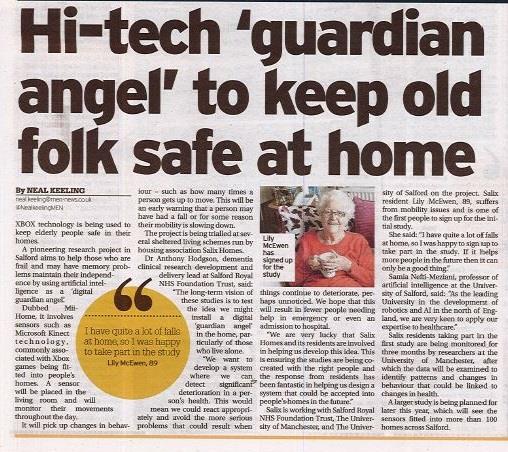 The Guardian ran a feature on the MiiHome project, which included an interview with one of the tenants participating in the project, George Foster and also included photographs of the technology installed in a property.  Read the article here.